μ-haus: μ from the Greek “mu” meaning “micro” and haus from the German “house” or “shell” as in a turtle, where home is a livable extension of one’s self.

As the world’s populations shift towards cities, the issue of urban density comes into focus. Laneway housing, tiny homes, off-grid and NetZero dwellings all address a facet of an unknown future regarding over-population, energy resources and climate change.

μ-haus addresses all of these as it is an in-fill build that can be independent from city infrastructure and, if grid-tied in Ontario, it creates an income both in terms of rent and energy sold to the grid.

μ-haus collects water from its roof, stores it, purifies it, and when it comes to disposing of it, does so without the creation of black water, thanks to a composting toilet.

μ-haus is superinsulated; a highly efficient air-source heat-pump supplies its minimal heating and cooling needs. In the fall and winter when the sun is low in the sky, the south facing windows collect solar energy. In the spring and summer, large overhangs protect the home from overheating.

μ-haus is compact and appropriate for even the smallest of urban laneways, demonstrating energy conservation and, resiliency. It addresses density on a human scale. We see a future with a chicken in every pot and a μ-haus in every backyard.

μ-haus is a 200 square foot tiny house, intended for in-fill in an urban context. Though it is difficult to reach Passive House standards in such a small building, μ-haus shows significant energy savings in both space heating and total primary energy due to superinsulation and efficient appliances.

The issue of size was addressed visually by creating tall, sloped ceilings that let light in and create headroom in the loftstyle bedroom, a table that transforms for coffee to dining and a staircase which folds away.

The 20 roof-mounted solar panels collect more energy than the home requires, making μ-haus net positive in terms of energy. The roof also collects all the water necessary for the home, storing it in six cisterns in the crawlspace. Heating and cooling are supplied by a high SEER heat pump. Fresh air is supplies by two synced micro HRVs. The home is small and comfortable with basic  amenities. It is intended for a single occupant or young couples comfortable with sharing the space. 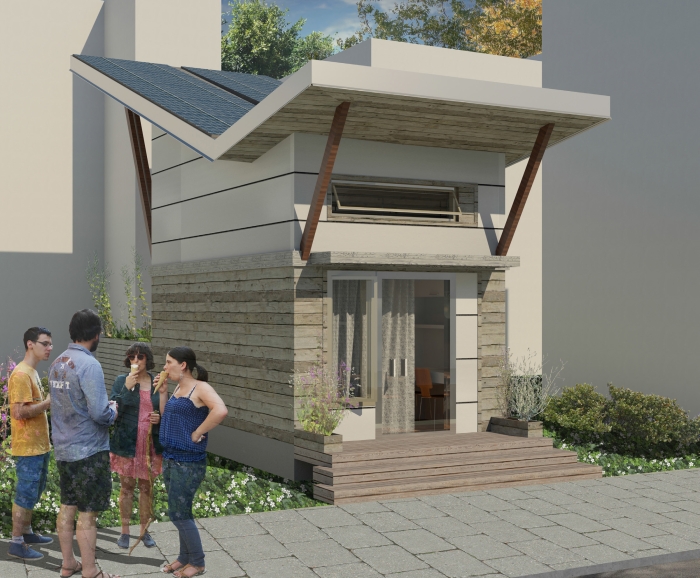 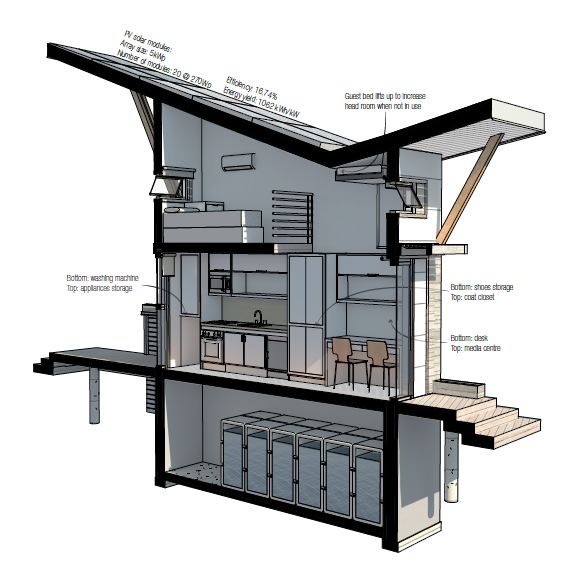 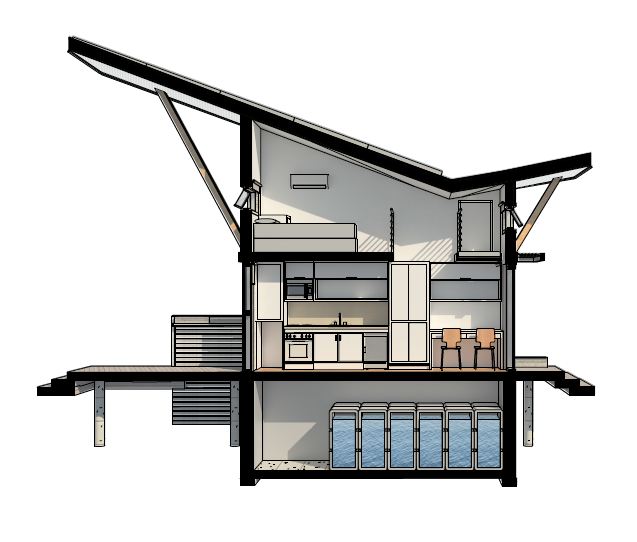 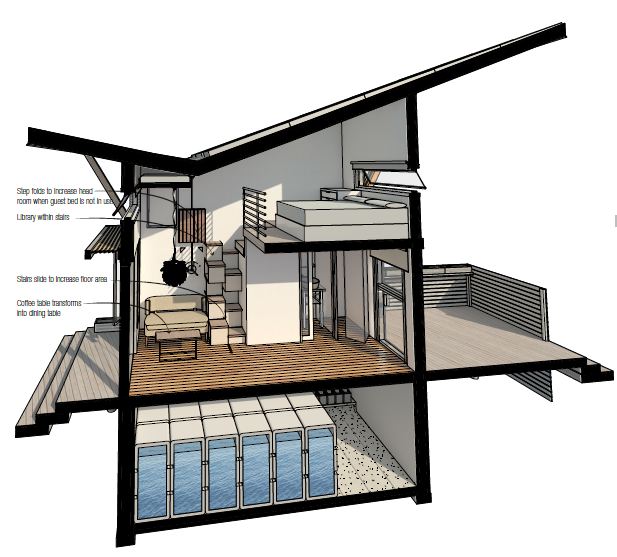 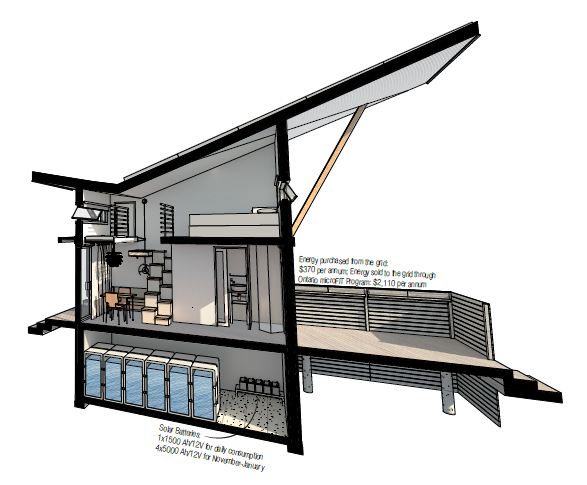 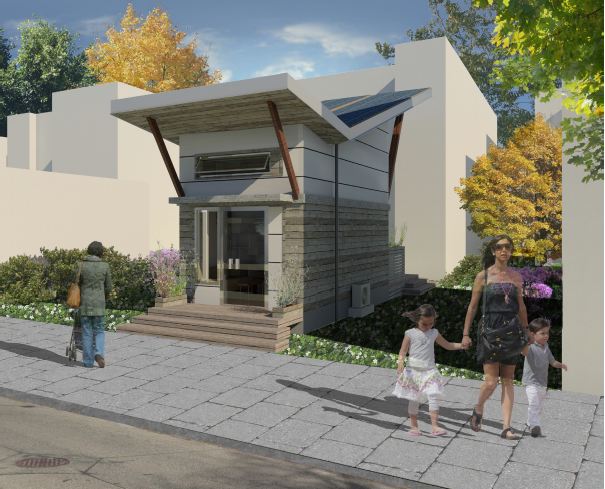 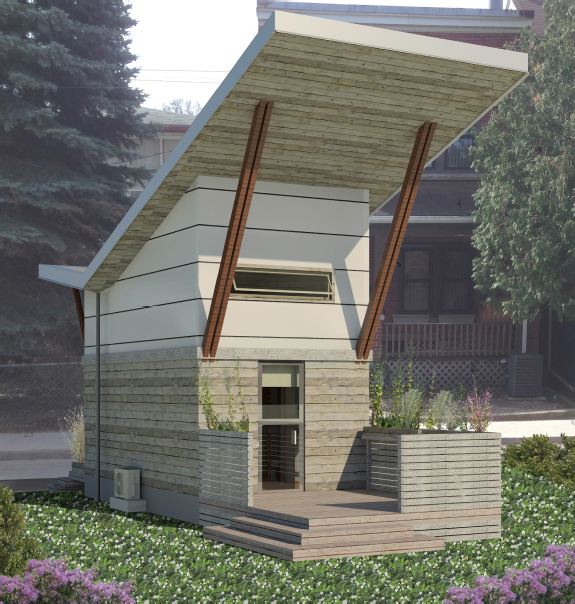 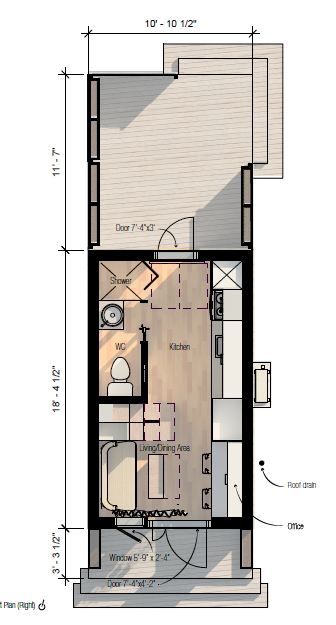 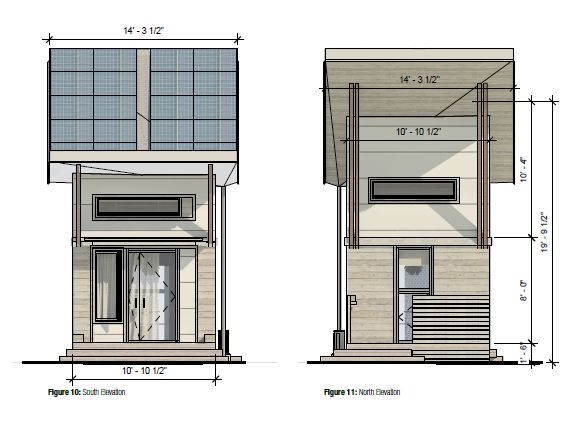 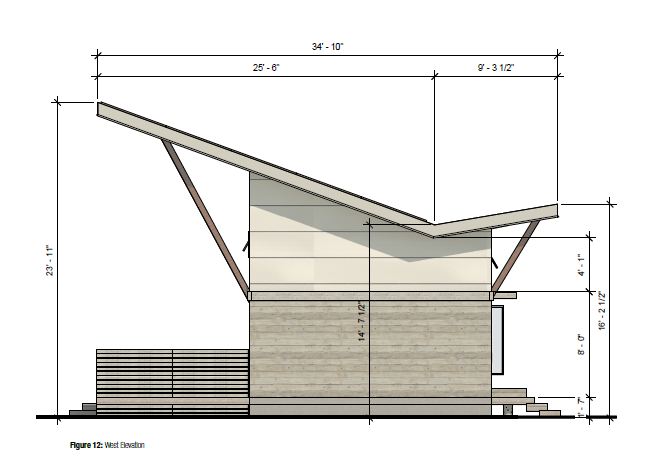 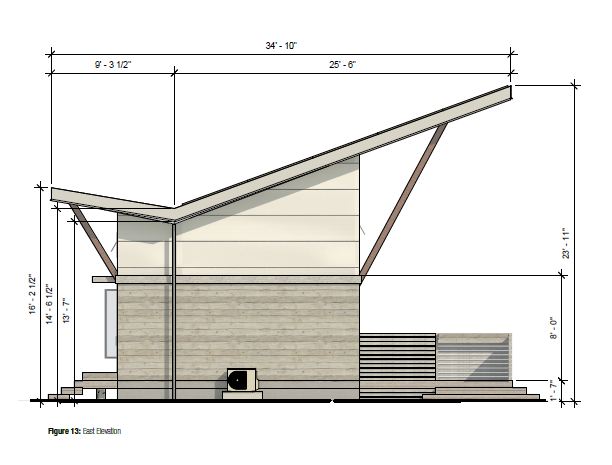 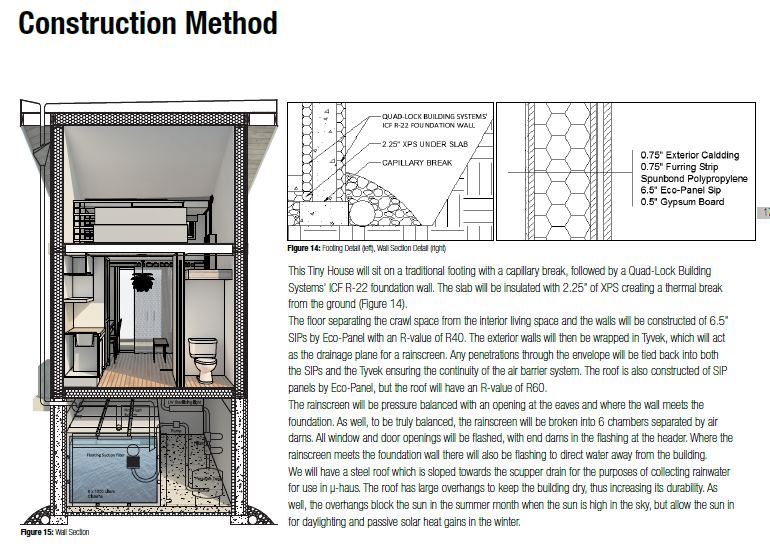 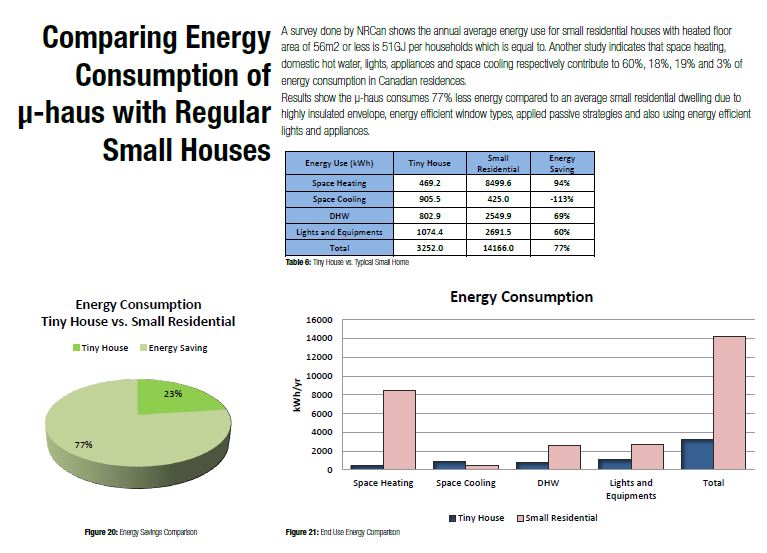 Reply Knot-Kupid
7:22 PM on July 17, 2014
Nice design and interior for a school submission. My only concern is the modified butterfly roof during extreme storm conditions as in hurricane force winds. Just a pet peeve as I've lost a roof or two to hurricanes and like lower profiles that can also collect rainwater without the same wind load concerns. But I'm not an engineer and my comments might not even be valid or worth consideration. Moving on, nice use of the stairs as space for a mini-library and once you get comfortable stepping up with the right (left) foot the alternating stairs are a space saving wonder in small interiors, though, for personal pinch disc safety, I've become a single story man.

Just as an afterthought here, I'm wondering how you believe you can maximize your solar footprint in many "urban" infill situations unless you are only considering low-rise residential spaces? True, you have about a three story profile but aren't many areas open for urban residential applications mid-rise and high-rise spot lot situations? Wouldn't this adversely effect your solar gain? Still, its a sound architectural exercise and glad to see its somewhat contemporary in style and not the typical retrospective architectural homage. Good luck in the contest.

Reply ergodesk
3:08 PM on July 11, 2014
Very comprehensive design, would be nice if EPS Composites were the suggested building method.