I have designed this 10 by 12 foot barn style house to fit the restrictions found in some rural areas which allow for one or two buildings no larger than 120 square feet, or sometimes specifically no larger than 10 feet by 12 feet, to be constructed without a building permit. If a solar assisted, self-contained constructed wetland were used for black water recovery and gray water were reused whenever possible, you could safely avoid the need for standard septic as long as your local officials allowed these systems, and so long as you engineered them carefully. Water and snow catchment from the roof, as well as an air well system of some kind could negate the need for a well permit and the expense of a drilled well. This unique yet traditionally styled design includes a wet bath with toilet mounted lavatory sink and three foot square shower. It has a small but fully functional kitchen based around a tiled stove, and a guest bedroom in the form of a sofa bed. The tiled stove could be designed with dampers to control hot gas flow around the oven, under the burners, and could even include a heat exchanger for on demand hot water. Thanks to the design of the sleeping loft this quaint home could be built to accommodate four people plus have the futon serve as a guest room. This design shows a very basic aquaponics system, but in truth you could easily include a more complete and densely populated system. Power could be photovoltaic or wind, but an experimental idea is to combine solar thermal convection with an axial wind turbine. I am currently developing this unit as well as other power options such as ambient collection (ala Nikola Tesla) and nanohydro systems. Backups for power and hot water could be provided via propane, or by creating methane from a bioreactor, which could be more affordable. Heating is provided by the thermal mass rocket stove covered in tile or soapstone, sometimes called a Kachelofen. The supports for the folding loft are shown as hinged, but would be more stable if they were permanent. The cover for the fold out deck rolls up onto a pipe spool hung from rafters in the sleeping loft (not pictured) and the loft is accessed through a loft door with folding ladder such as are found on many homes. This design is shown standard framed on a concrete slab, but could be built using concrete piers as well. The storm cellar with pantry would be just off the front door to the north (away from the greenhouse) and would house a chest freezer and full size refrigerator. 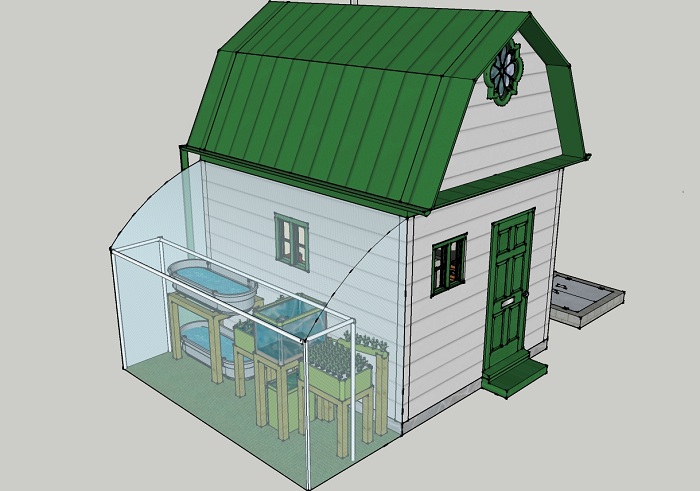 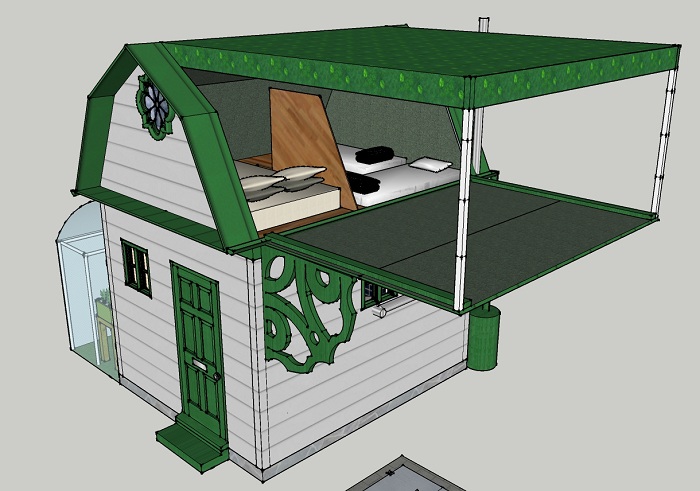 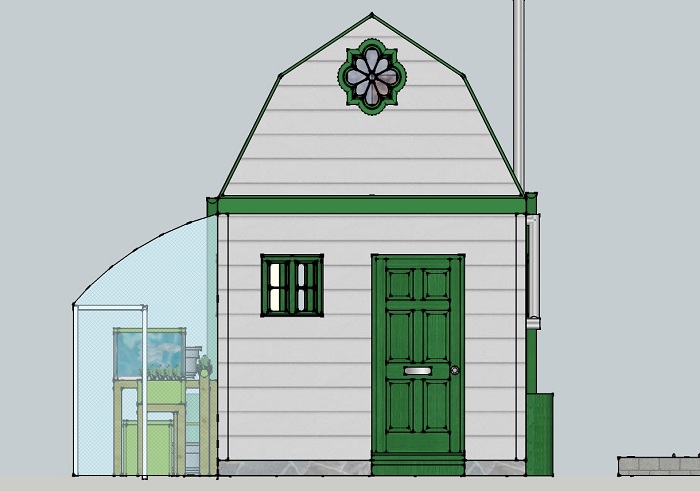 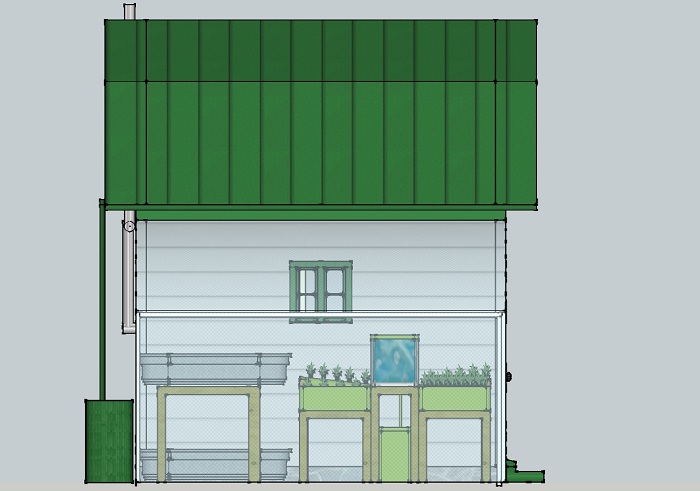 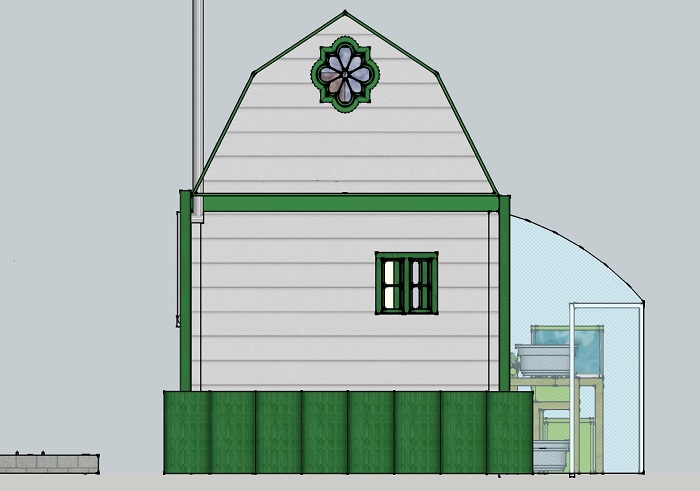 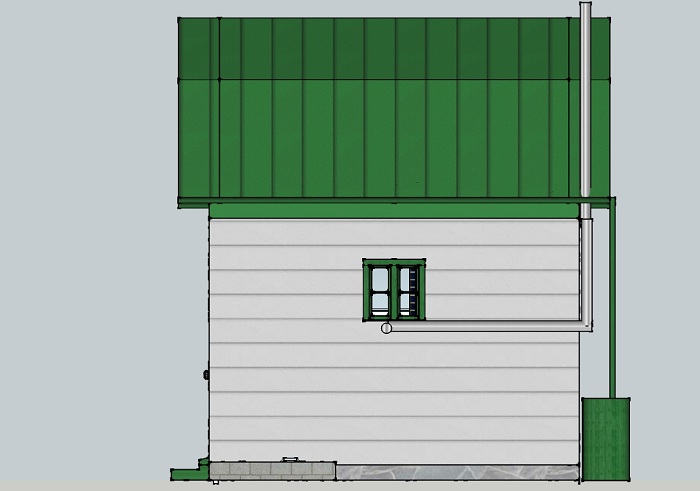 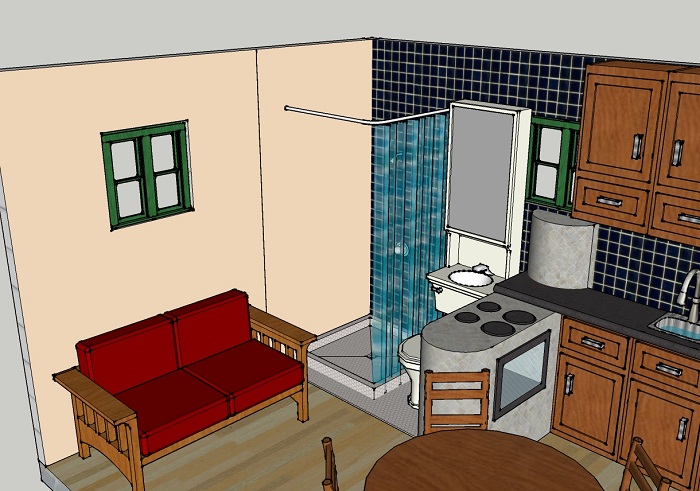 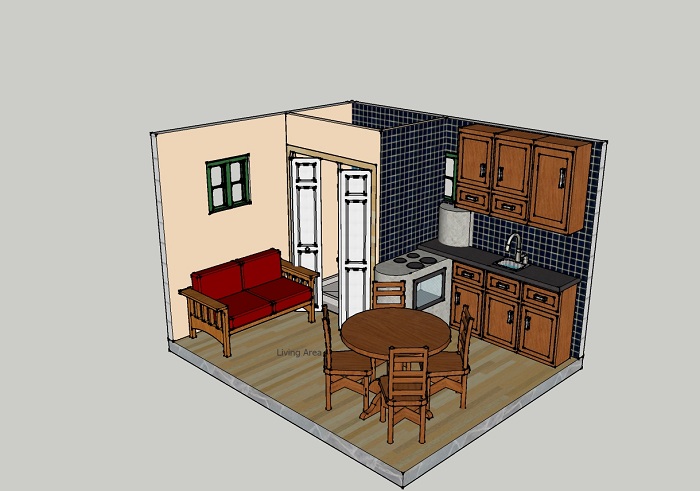 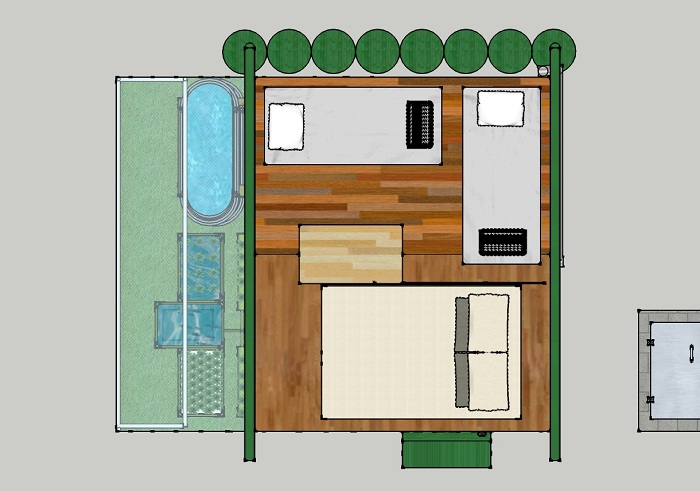 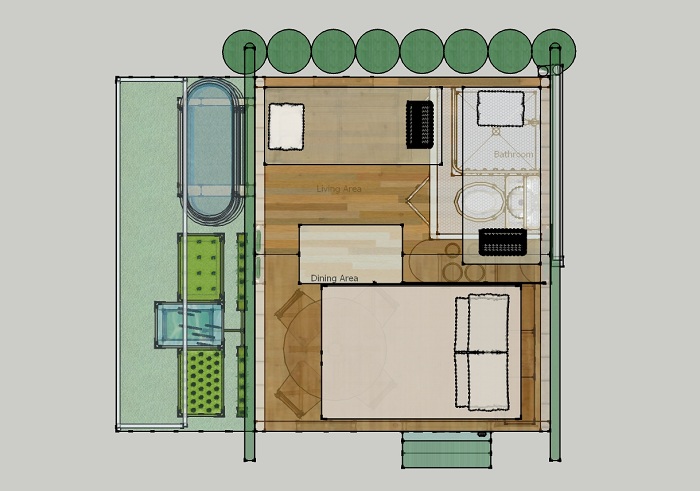 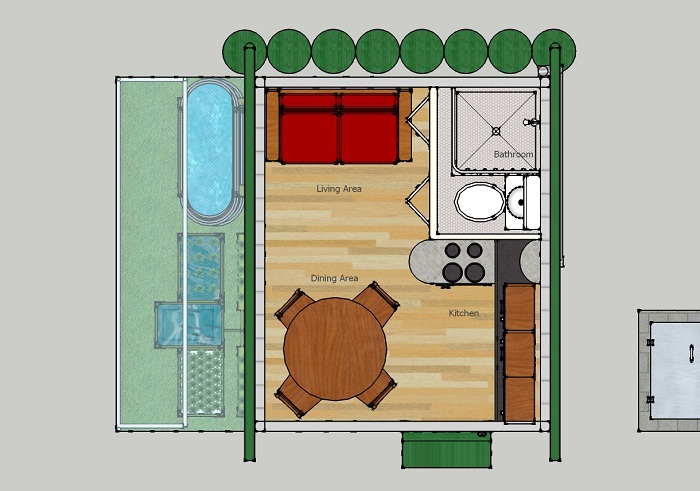 Bomun says...
I like the built on greenhouse. Is that aquaculture or rainwater collection in there?
The barn style roof definitely opens up the loft space.

The greenhouse shows a simplified Aquaponics setup, but the green barrels along the rear of the house are for water catchment.

Reply Bomun
10:36 AM on July 8, 2014
I like the built on greenhouse. Is that aquaculture or rainwater collection in there?
The barn style roof definitely opens up the loft space.