My Story of Homelessness 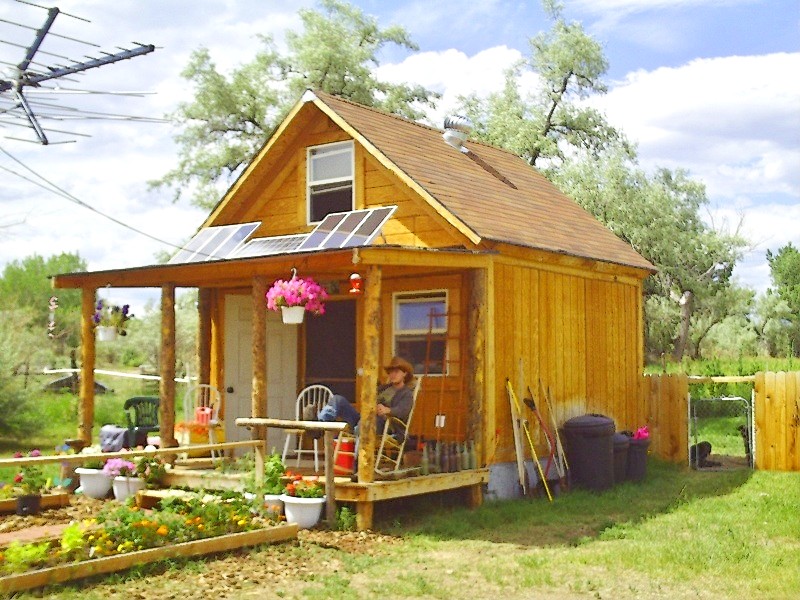 At the beginning of 1998 I had a teaching career, a big house with a pool, nice car and 3 car garage and all the bills and mortgage that goes with that lifestyle. By the end of 1998 after a sudden illness and divorce I found myself homeless and broke and unable to continue my career. I was never comfortable with that lifestyle but I had fallen into the debt cycle of slavery and did not see a way out.

I had $200 to my name, an old truck and camper and a small piece of property I inherited from my families homestead and that is where I would start my life over.  My vision was to be debt free and have no ties to the government or corporate slavery that had entrapped me before.

I lived in that camper for two years while I cleared the property that was badly overgrown. I installed a small solar electric system because the power company refused to hook up the power without a "proper" home and following building codes. I hauled water in the first year and then drilled an agricultural well and tapped into my brothers well so I could raise a garden, rabbits and chickens. It was tight quarters with two large dogs but survivable although winters were damn cold and propane was expensive to heat the poorly insulated camper.

I was able to find part-time work and in two years I had saved up $2000 and I designed and built a 14x14 off-grid cabin that would be easy enough for me to build by myself and under the 200 sqft limit the county required for a dry cabin with no utilities. The county was not too happy with my building without a permit but because the property was grandfathered in under state law they deicided to not fight me. It helped that I had many relatives in this area that would vote in elections for these same county officials.

I used a lot of recycled materials in my cabin and the windows and doors were free from salvaging an old trailer that was being demolished. Recycled cedar fence boards for trim and cheap green lumber from the local lumber mill was used for the porch. The building process was pretty straight forward and easy and I used a modified post and beam for additional roof strength for our heavy snow load. Only the roof was difficult for one person and I managed to fall off the ladder twice and tore the ligament out in my knee but finished the cabin before I would get surgery as I had no insurance.

I recycled all the appliances out of my camper for the cabin. Sink, shower, lights, water pump, propane system and the solar electric system went on to the cabin and the cabin was designed to be like a self-contained RV. I designed a solar assisted composting toilet system that utilized the old septic tank on the property but speeded up the composting through a greenhouse window effect since the old drain field no longer functioned.

Now that I had no house payments, rents, monthly utility bills or debt I was able to spend much less money on things I didn't need and I started a small local pest control business. I invested in some sprayers, a business licenese, signs for my truck and cheap local advertising and I was in business. My customer base grew rapidly through word of mouth and in a few years I had over 2000 regular customers. I was not stupid this time and I put that money back into my homestead and business and into a nice retirement fund in the event things fell apart again (and they did in 2008 with the housing market crash).

I had also documented my cabin designs and kept a journal so I decided other people might benefit from my story and I published my first ebook "Simple Solar Homesteading" online and used the free homesteading forums to promote it. I did not expect a lot of response but the ebook took off like crazy and more than paid for the cabin and allowed me to increase my solar electric system and add a wind turbine and other sustainable projects.

This started me on a journey of designing inexpensive projects to help other people to build sustainable homesteads and inexpensive houses and I designed many more small cabins and alternative energy systems that would later become my book "Ultimate Off-Grid Guide". I determined to keep my prices low so everyone everywhere could have access to these designs and I put the proceeds from those books back into new projects, videos and designs.

I have never used commercial advertising for my work and I have relied on word of mouth and that word has been helped greatly by the many people that follow my videos and progress and by magazines and publications like Mother Earth News, Inhabitat, Treehugger, Lloyd Kahn books and other publications that have included me in their publications. Without that it would never have grown into this website and several books and many house designs being available.

It has now been over 15 years since I started my journey into sustainability and because of that decison in my own life I can now give back and help other people on their journey and I have made this website a not-for-profit organization dedicated to ending homelessness and the poverty it creates by producing inexpensive off-grid house designs and homesteading projects so that people everywhere can have a safe and sustainable home.

Thank you my friends for making it possible!

Reply Imzadi4you
10:25 PM on August 28, 2016
Me and My GF are learning and starting to buy all the books we will need for living off the grid... This is the first book I have ordered today (8/28/2016)... I'm looking forward to this book coming in the mail... we both have are own RV's that we will also be turning into solar power... I've watch LaMar youtube videos and they are very good and helpfull to anyone wanting to learn how to live off the grid... LLP Imzadi4you

Reply Enrique
8:07 PM on October 16, 2014
Very inspirational story! I too have fallen on some hard times and I'm sick and tired of fighting and fighting to just stay above water, you know?

I've been looking to go off the grid and for someone new to this, it's not easy to gather all the information needed. Your site was a blessing, so much stuff here that is invaluable information!

Thank you for your kindness in sharing it! It will definitely give me a head start and a lot of hope!

Take care of yourself and keep on, keeping on!